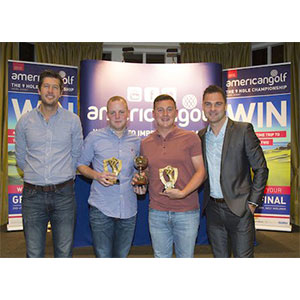 To go with their prestigious national title, the Yorkshire golfers have also won a holiday in the Bahamas and a round of golf with Paul McGinley.

Upon accepting the American Golf 9 Hole Championship Trophy from Sky Sports presenter Rob Lee, Eustace commented: “I hope that this doesn’t show that I’ve had a dull life, but it’s easily up there with the best weeks I’ve ever had. We’ll definitely be spreading the word about the American Golf event for next year.”

20 pairs took to the greens and competed over two rounds of 9 hole golf using betterball stableford scoring off ¾ handicap with the four highest scoring pairs over the two rounds progressing to the semi-final matchplay and subsequent matchplay Grand Final.

Kelly and Eustace’s semi-final battle went right to the wire as they secured victory on the very last hole before taking on Swindon brothers Sam and Tom Ruddle in the final.

And Kelly and Eustace wasted no time, storming out of the blocks and quickly taking a two-shot lead, which as Kelly explained, was vital. “Because of the short format and the early lead, we really settled in and we never felt like we were losing.”

As the stakes began to rise so too did the pressure on the amateur golfers, while the SKY TK cameras on site and the support of a cheering crowd also contributed to the occasion as they played through the final 9.

However, Kelly and Eustace kept their cool and Eustace hit arguably the shot of the final on the 7th as he rescued his ball from the sand to sink an amazing birdie putt to go 2 up with 2 to play. From there the pair never looked back and carried that momentum into the next, winning the hole to secure their victory 3&1.

The American Golf 9 Hole Championship has proven to be incredibly popular and enjoyed a great turnout at the qualifying events. Mark and Luke commented on how much they enjoyed the shorter format as it gave them a challenge in how to approach the game.

“Normally over 18 you have to plan & study where to pick your shots whereas it’s a bit more fast & furious over 9 holes,” they said.

“The golf this weekend has been really good fun to watch,” commented Daniel Gathercole Head of Marketing at American Golf. “It’s been exciting to see our ideas come to life and to realise that there is a real opportunity for us to grow the game by introducing new formats and reaching out to different types of golfers. We’re already making plans for 2016 which will appeal to an even wider range of people.”