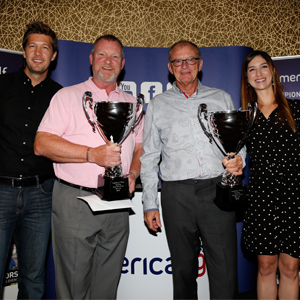 American Golf is delighted to announce Ian Hendry and Martin Leo as its first ever Seniors Champions after two rounds of high quality golf from the low handicap pairing. Playing off 7 and 5 respectively, Ian and Martin, both from Bognor Regis, totalled a hugely impressive 78 points in the face of very difficult conditions to take the title by six points. In second place were Northwich pairing Andrew Threlkeld and Nigel Wells who edged out Alan Simpson and Alan Drew on countback with 72.

The culmination of months of qualifying events, Grand Finals weekend brought together qualifiers from all over the U.K. and Ireland to play 36 holes over two days on the Brabazon course at Ryder Cup venue The Belfry. From the off Hendry and Leo set down a marker with 40 points against a stiff wind in round one despite facing a number of challenges as Ian explains, “I was on a boating holiday until Thursday so all through the first round I still felt like I was at sea. I flew back on Thursday night and drove from Bognor on Friday morning to make the tee time but I’m so glad I did. American Golf have been fantastic hosts and we played some great golf. The one thing I’ll insist on changing next year though is that I won’t share with Martin as his snoring kept me up all night and I nearly missed the Saturday tee time!” 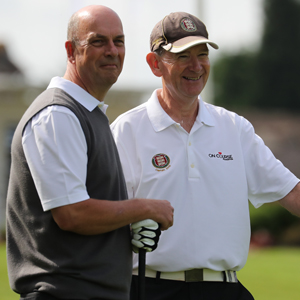 Sitting in top spot by two points overnight and just making their tee time in torrential rain on Saturday, Hendry and Leo set about a repeat performance of their first round. Some consistent golf and impeccable teamwork saw them pick up 38 points to secure victory by six. Martin explains that it was the dovetailing of their games that ultimately paid dividends, ““To get the chance to play a Ryder Cup course from entering a free competition has been amazing. The organisation by American Golf and their support team has been brilliant and to top it all off we’ll be on Sky Sports. We mixed in some good golf with some bad shots but as a team we combined really well. It was our first competition together but it definitely won’t be the last as I already can’t wait to come back and defend next year.“

After securing second place for the Championship Nigel Wells reflected on the two days at the Belfry and his and Andrew’s experience with American Golf, “We’ve been so impressed by American Golf from qualifier to final and to come in second really has been the icing on the cake. We were also delighted to see the charity that both Andrew and I chose for our own Captain’s charity in 2015 & 2016, On Course Foundation, as the official charity of the event. Their work helping wounded, injured and sick Service personel using golf is inspirational and we were delighted to see so many of the charities members working, playing and benefiting from the American Golf finals weekend.”

Following the success of the Seniors Championship, the event is set for a return in 2017. It will maintain its place on the American Golf roster with existing free events, 9 Hole, Ladies and Long Drive. American Golf will also be adding five new free Championships focused on getting more people playing golf more often when they introduce the Family Cup, Pitch & Putt Championship, Adventure Golf Championship, Scratch and Individual Championships.