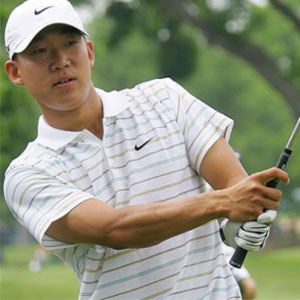 Back in 2007 the golfing world was in universal agreement that a young golfer named Anthony Kim was one of the best players on the PGA Tour.

With two wins and a sixth-place finish on the money list in only his second full season, Kim also helped the US stage an incredible victory at the 2008 Ryder Cup later that same year.

And then things began to unravel following a winning effort in 2010. Injuries, often the bane of many promising young talents, crept into his game and forced him to miss certain events. Then the rumour mill chugged into life and whispers of an off-course extravagant lifestyle dogged the player until, after just 10 starts in 2012, Kim quit the PGA Tour and essentially vanished from the public eye.

However, Kim gave his first interview in three years on Tuesday, saying: "Golf is a fond memory of mine. I've been watching more and more. I miss the competition a little bit. Watching these young guys like Jordan Spieth is bringing me back to watch."

When asked if what he was watching on television was enough to entice him back to the greens, Kim said: "Here's what I'm telling you today. I'm going to step away from the game for a little while and get my body pieced together. Instead of going from an Achilles injury to try to go 180 mph and not fixing the problem ... I've got so much ground to make up from injuries — rotator cuff, labrum, spinal fusion, hand injury. I've had six or seven surgeries in the last three-and-a-half years."

At 26 years old, it was asked if Kim had played his last round on the PGA Tour. With a smile and a chuckle, he said: "Anything is possible. Isn't that what the slogan says?"

Due to his injuries, Kim says he hasn’t managed to play a full round of golf in 18 months. Physical therapy takes up much of his time and leaves little margin for game time.

A few unsavoury rumours of Kim being spotted sleeping rough on the streets of Las Vegas due to having no money left following his disappearance refuse to go away. Kim earned just over $12million in five full seasons on the PGA Tour and says he saved up more money than people realise. Stories and photos cropping up on social media over the years painted Kim to be a wild character, and although Kim does not deny these claims in his recent interview, nor does he apologise for it.

"If you don't like the way I live, change the channel. You're the one who tuned in here," Kim said. "A lot of the golf public may not appreciate the way I live, which is by my own rules. But I give everyone respect. I'm not rude to anyone. And I treat everyone the same."

Kim also answers questions regarding the fact he receives monthly payments from an insurance policy he took out five years ago in case he was injured. But he vehemently denied claims which were made in a magazine article last fall that the policy was a factor keeping from returning to the PGA Tour.

"I paid well into the mid-six figures for the policy," he said. "They wouldn't have paid me every month had I not been to the doctors, showing them all my X-rays, doing all the treatment, the acupuncture, twice a day for physical therapy."

He also explained the reason he ignored summons for drug testing when he walked to the parking lot while playing Quail Hollow, with the player eventually getting tested after initially seeming to refuse.

"I was mad about how I played. I injured myself again. I ended up coming back and taking the test," he said. "I've never tested positive for anything since I've been on the PGA Tour whenever the drug testing started. Never. And they tested me more than anyone.

"These rumours tainted my reputation," he said, "and I didn't have a great one to begin with."

Kim said that he wasn’t planning on being gone from the game this long. He played with Phil Mickelson at the Madison Club in the California desert, rented a house in San Diego to prepare for the 2013 season and said he was up at 5am every morning to train when his Achilles tendon popped. Once he recovered from the leg injury, his disk herniated. From there the ailments began to pile up.

If Kim ever decides to return to golf he still has a major medical exemption he can use. But he would need to earn $613,500 in 16 events to keep his card.

Rating his health as “6” out of 10, Kim said he was in the process of moving, hiring a trainer and getting his body back to full health with hopes of one day giving golf one more run.

"What Spieth and (Jason) Day did this year was ridiculous," he said. "I'm not going to compete with those boys unless I'm healthy. I'm not playing with 11 clubs. My goal right now for the next year is to get healthy. At this point, I'm happy where I'm at where I'm headed."

Kim was given a platform to finally put to rest a lot of the rumours and suggestions about his physical and mental health, as well as his wild lifestyle and possibility of one day returning to golf. It’s been a long three years waiting for answers, but it looks like people now have them. And Kim can finally answer the most pressing question which had been asked of him over the past two years: whatever happened to Anthony Kim?