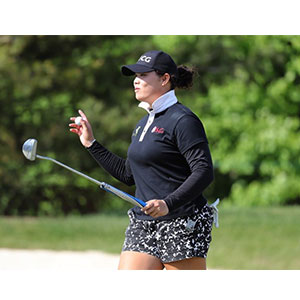 The Thai soon-to-be superstar became the first player in Tour history to have the first three wins of her career come in consecutive tournaments.

The 20-year-old is also the first player since Inbee Park in 2013 to win three LPGA tournaments in a row.

She shot a 67 to win by five from Christina Kim while England’s Charley Hull, who struggled with tonsillitis during the week, tied for 20th.

Jutanugarn has risen No. 10 in the world rankings and her latest win came courtesy of four birdies in the last six holes.

What Jutanugarn said: “This year I just really want my goal is just like win a tournament so I win like three in a row quick.