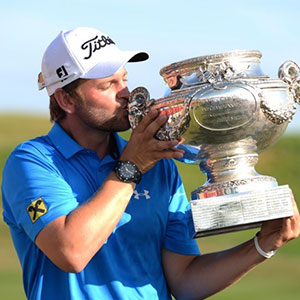 Austria’s Bernd Wiesberger produced a master-class in the final round of the Alstom Open de France to finally add his name to the list of champions.

The 29-year-old claimed it was a dream of his to lift the title at Le Golf National ever since he shot a 62 on the Challenge Tour in Lyon back in 2010.

Wiesberger carded six birdies in a flawless round to finish 13 under par, three shots ahead of playing partner James Morrison, who also did not drop a shot in a closing 67.

Overnight leader Jaco van Zyl was two shots further back after a disappointing 73, but at least had the consolation of joining Morrison in claiming one of the three qualifying places on offer for the Open Championship.

Rafael Cabrera-Bello secured the remaining place at St Andrews thanks to a stunning back nine of 29 after going to the turn in 40, the Spaniard carding two eagles and two birdies to finish fifth, a shot behind two-time major winner Martin Kaymer.

“This tournament is very special to me, Wiesberger said.

“It’s one of the biggest events we have on Tour every year and probably the most tradition, the oldest one on Continental Europe.

“I had my lowest round as a professional in France when I won on the Challenge Tour in Lyon in 2010. I won again later in 2010 in Toulouse and I told the promoters I was going to come back and win on the big tour in France so I’m happy to have finally delivered.

“I’m very proud to be on the winner's list now, on this trophy dating back to 1906 it says here. It's amazing and it was a great week. I really enjoyed playing in front of these crowds here and performing the way I did.

“I have to say, James Morrison who I played with played great golf, as well, and gave me a good run which made it quite tight at the end.”