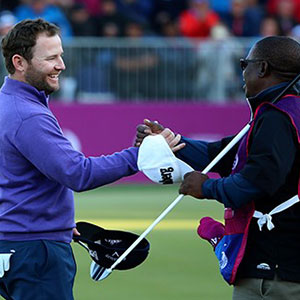 South Africa’s Branden Grace edged closer to the world’s top 10 after defending his title, the first player to do at the Qatar Masters.

A three-under 69 got the job done and it was a fifth straight top 10 this season.

Rafa Cabrera-Bello and Thorbjorn Olesen tied for second while overnight leader and two-time champion Paul Lawrie had a stinker of a day, slumping to a 78.

The Spaniard birdied his last three holes to make his move on a day when only five players broke 70.

Grace had four birdies on the day, a fortunate break at the 1st got him going and he recovered from a dropped shot at the 5th with a second birdie at the next. A pitch close at the 10th pulled him further clear and a brilliant long iron into the heart of the green at the 72nd hole sealed the deal.

What Grace said: "It's a big thing to come to a week defending. You've got a lot more pressure and a lot more things going on that week. There's no better place to do it than Qatar. This was really one of my biggest wins to date last year, and I think this is just going to push it up even higher.

"It's all a big learning curve as your career goes on. I've learned a lot this week, learned patience, and I've learned what it takes now to defend a title. And not just that; to win a title again. It happened last year, but it feels long gone. So it's great to be in the winner's circle again.”