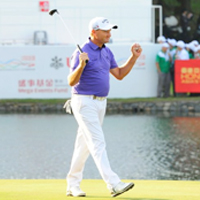 The World No 480 Brazel birdied the 72nd hole to pip Rafa Cabrera Bello for his maiden win at 37.

The Australian (68) began Sunday tied with the Ryder Cup star of Hazeltine and wastwo behind after six holes. But the Spaniard failed to locate the 8thgreen with a chip to add a double to his previous bogey and Danny Willettthen came into contention with five birdies in his first 13 holes.

The Masters champion played the last five holes in one over to finish in sixth and Brazel found his first birdie of the day at the 11th with a tee shot to a few inches.

He then knocked in a 35-footer but the Spaniard sprung into life with birdies at 16 and 17 to leave them level playing the last. Brazel hit an approach to seven feet and knocked it in for a remarkable and completely unexpected victory.

Fellow Aussie and Tommy Fleetwood finished two strokes back to tie for third.

What Brazel said: “It’s been a long time coming. I’ve been playing good but it’s been a bit of a struggle with the old irons but I got set up with a new set of clubs, and it’s all sort of turned around.

“I wouldn’t say I got the shot into the last straight out of the middle but I’m pretty stoked where it finished, I’ll tell you.

“I think I still had some nerves on the first tee but I settled in pretty quickly. It wasn’t as bad as Saturday. I had a great playing partner in Rafa. I was stoked to play with him for the last two days.”