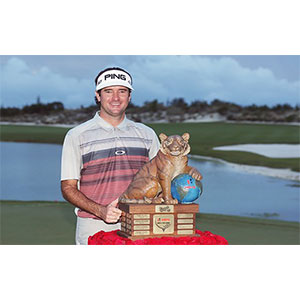 A Saturday 63 set Bubba Watson up for a three-shot victory over Patrick Reed in the Bahamas.

Rickie Fowler was third while Jordan Spieth ended his incredible year with a 67 for fourth spot.

It was Watson's second win this season and he did it in some style, with seven birdies and just one dropped shot at the last.

He originally turned down an invite as he didn't think he would be able to get his children's travel documents completed.

Jason Day then withdrew after his second child was born and and Watson made his way to Albany.

The highlight was an up-and-down birdie at the 11th from a waste area.

Justin Rose finished down in 13th of 18 but did have the consolation of a closing 62.

Watson said: "I guess I've got to thank Jason Day for backing out. I have to thank the U.S. government and passport office for getting Dakota a passport so we could be here. For us, it's a good ride, a fun ride.

"I want my name to be close to that leaderboard every tournament, every year, so people are always talking about Bubba Watson, about how consistent he is and good he is.

“That's my whole focus right now, every year getting better and better."