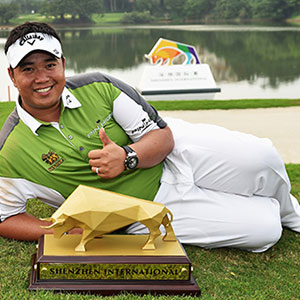 “I wish I would have putted better in the first three rounds,” Watson said.

“I putted well in the last round. All in all it was a good test. It shows me what I need to work on. It shows me that I can play outside the US, especially today.”

Watson, who won the HSBC Champions in Shanghai last year, fired an impressive final round 7-under eventually leaving him tied-29th alongside Englishman Chris Wood and Italian Matteo Manassero.

Tong, the young Chinese player, had carded a final round five-under to sail clear at the top of the leaderboard earlier in the day.

Aphibarnrat was reliant on a 17th hole eagle to card a level-par final round, and force a playoff.

Aphibarnrat, whose only other European Tour victory had come at the 2013 Maybank Malaysian Open, approach found the middle of the green while Li left himself a much longer putt.

The Thai player promptly sank his putt for birdie, and took the title.

Aphibarnrat said: “Special thanks to my caddie, he was always pushing me.

"When we were two behind on the last two holes he said you have not lost, we have not signed the scorecard yet and he was completely right and I just got the job done.”

“I had a chance to win in 72 holes but the putt in the play-off is the best putt I have ever made in my life.”

A packed leaderboard included England's Tommy Fleetwood, who a carded a final round three-under par to end the tournament at 11-under and a third place finish, one ahead of Peter Ulhein.