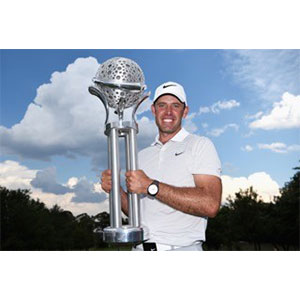 Charl Schwartzel, the 2011 Masters champion continued his incredible run in his home country as he carded a 63 for an eight-shot win at the Tshwane Open

This was his 11th victory on the European Tour and his eighth on home soil.

The 31-year-old led by one overnight and he made that four after an eagle at the 9th after an adjacent approach.

Lengthy putts at 14 and 16, his first birdies of the week at the par 3s, put the result beyond doubt and he signed off in style with a seventh birdie of the day.

It is Schwartzel’s second win of the season having also taken the Alfred Dunhill Championship in November.

On his only other start he was tied for 9th at the Nedbank. He might now move into the world’s top 30.

Denmark's Jeff Winther finished second on eight under, with Anthony Michael, another South African, a further two shots further back in third.

What Schwartzel said: "It’s just frustrating when you don’t putt very well and you don’t convert, and to make the putts when it counts, that’s even more satisfying.

"Everything is sort of falling into place. I’ve worked really hard leading up to this and it’s just been feeling good, so everything has got some really good signs, so I’m excited."