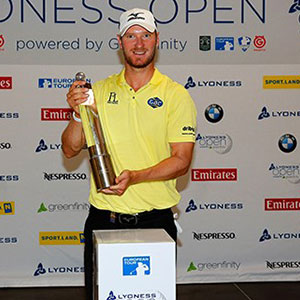 The 27-year old's bogey free round saw him finish 15-under for the tournament and is his second win on the European Tour.

In testing conditions Wood produced some fine golf to catch overnight leader Gregory Bourdy and card a five-under 67 in Austria.

"It's been a long time since Qatar and since I had my hands on a trophy," said the Bristol native. "After a long tough winter injured you do wonder if it's going to happen again.

“I injured my wrist playing tennis last October and had to rest for five months.

"I came back in March and finished third in Morocco which I thought would give me a lot of confidence but then I didn’t get the results after that and played quite poorly for a few weeks.

"But the last month I have felt I was playing well enough to win so it has been coming."

When asked if this more difficult than his first win, Wood said: "No, I'd say the opposite.

"I was leading by a couple going into the last day there, it's always hard going to sleep on a lead.

"And you have a lot of things going through your mind.

"Today I was five behind going into the last day and I just knew I had to -- I had a goal of breaking 68 today and I've managed to do that.

"I thought it would be close, depending on what Greg [Bourdy] did obviously.”