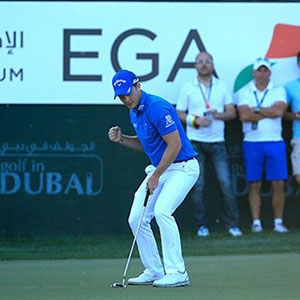 The Dubai Desert Classic saw a fourth win for Danny Willett after a week which contained 26 birdies and an eagle.

The last shot of the tournament proved to be the Englishman’s final birdie, a 15-foot putt to pip Andy Sullivan, who had holed a similar putt in the group ahead, and Rafa Cabrera-Bello who had two-putted for his birdie in the final pairing.

This was a huge win for the Sheffield player in terms of his Ryder Cup and Olympic aspirations and he did it with a closing 69 to finish on -19.

There were three bogeys on Sunday but successive birdies at 12 and 13 took him clear and his nearest rivals couldn’t quite catch him. Willett closes it out after laying up at the par-5 18th and then wedged to 15 feet.

Sullivan, who began the week with a double-bogey, had just done likewise while in-form Cabrera-Bellow birdied the last two holes. Ben An and back on song Alvaro Quiros closed with 65s for a share of fourth.

Rory McIlroy also had a 65, his best of the week. He was 29 under for his two Desert Swing outings and, while plenty will have expected a win, there is plenty to like about his start to 2016.

What Willett said: “I’m just ecstatic. You can’t buy that feeling, coming down the back nine, the last three holes, in contention of a tournament. You can't pay for that experience: you've got to earn it. With all the permutations that were going on as we were coming down the last, with Sully making birdie ahead of us and then Rafa on the green in two, it’s very nice to know that I can dig deep and produce what I can when it is needed the most.

"You'd love to win by five or six every time you win, but when you win in that fashion, it does feel that little bit extra special. It means when the pressure is on I can produce the goods, I guess. It’s always great to come out early in the season and win. Everything I’ve done has been really good this week, and mentally I’ve been as good as I have been for a long, long time. I stayed patient and let things happen.”