Dunne holds off McIlroy for maiden win at British Masters

Paul Dunne grabbed his first European Tour win after a stunning final round 61 bagged him the British Masters at Close House.

The Irishman chipped in for a birdie two at the last to sign off a brilliant 61 in emphatic style – his 20-under total giving him a three-shot victory.

Dunne was cruising through the final round, holding a three-shot lead after a birdie, birdie, eagle run helped him out in 30.

He had a little bit of luck, too, hitting a sprinkler head on the 11th green which catapulted his ball to about four feet.

It looked like it was his trophy to lose but McIlroy then birdied five out of the last seven to close with a 63.

It reduced the gap to just one and heaped the pressure on the 25-year-old for the run in.

Dunne, though, stood firm. His birdie at the penultimate hole gave him a two-shot cushion before he produced a moment of brilliance in front of the packed grandstands at the par 3 18th. 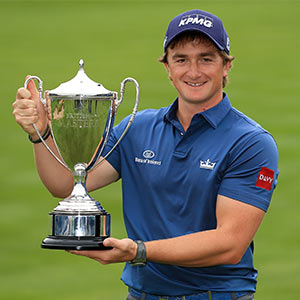 Tyrrell Hatton led by three at the half-way point, and tournament host Lee Westwood made his own charge down the front nine of the third day.

But both dropped away. McIlroy’s opening two rounds gave him lots to do but a third round 64 put him right in the mix at Newcastle.

It was Dunne, though, who grabbed the initiative early in the final round and didn’t let go.

He said: “It is a sense of relief to prove it to myself that I can get it done. I think I’ve improved mentally a lot over the last year in these kind of situations.

“I found myself in a lot of Sundays last year feeling like I needed to press forward and trying to chase my card.

“I was struggling with it. I feel like I’ve got a bit tougher mentally. I get excited to go out and try and move up the leaderboard rather than trying to consolidate a position.

“I think I took that into today and went out and really tried to win the tournament rather than have someone hand it to me.

“That was the focus, once I got my nose in front, to just keep pushing, make no bogeys and see how many birdies I could make. I’m absolutely thrilled.”

It was hard for McIlroy to be disappointed with a 63. He added: “I played well under pressure today. I gave myself plenty of chances and had some good putts. It just wasn’t quite enough.

“Paul is a very hard worker and it seems all that hard work has paid off. Anytime I was on the range, or the putting green, Paul was always there.

“He does things the right way and it’s very well deserved. I don’t think anyone going out today would have thought that 20 under would be the winning score.”