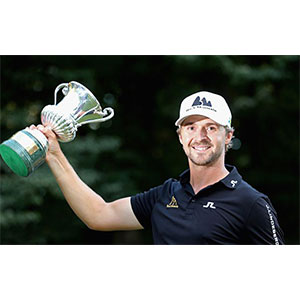 Kaymer had led by three shots on 21 under at one point but a disappointing back nine saw him finish alongside Karlberg, who had crept through the field with a 67, at 19 under.

Both men had parred the 18th all week and they did so again on the first play-off hole but Karlberg made birdie at the second attempt following a terrific approach over the trees to claim his first European Tour title.

“I thought I had a good chance this week because I have been playing very well lately but then when we were getting near to the end of the round I didn’t think I had done enough,” Karlberg said.

“But then I managed the birdies at 16 and 17 which was good enough to get into the play-off. Then to go on and win against a player as good as Martin Kaymer in sudden-death makes it very special.

Kaymer admitted he was disappointed not to get the job done.

“We made too many mistakes on the back nine,” he said.

“There were two or three tactical and clubbing mistakes. That happens sometimes but it shouldn’t have happened in that situation today because you need all the help you can get. We should have been more focused. I played well all week but not on the back nine today and that has cost me the tournament today.

“You have to say well done to Rikard. He made a great birdie to win after I had my chance in the first play-off hole. I had a good yardage to the flag but I didn’t really release the club and give myself a good chance for birdie. But I don’t want to take anything away from his win – he played a great final round then made a birdie to win the play-off so he deserved it.”

Seven players finished in a tie for third with David Lipsky and Lucas Bjerregaard joining Lagergren, Fitzpatrick, Willett, Fahrbring and Zanotti on 18 under.

Romain Wattel was then a shot further back after a disappointing closing 72 with Miguel Angel Jiménez and Roope Kakko alongside Italian amateur Lorenzo Scalise who finished as the top home player, two shots clear of Francesco Molinari.

But the day belonged to Swede Karlberg as he secured a career-changing victory which moves him to 47th in The Race to Dubai and secures his playing rights on The European Tour until at least the end of 2017.