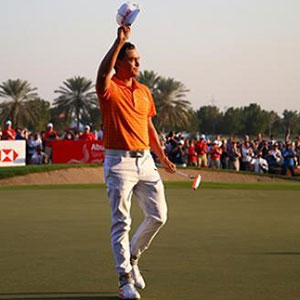 This was a second European Tour title for Fowler after he chipped in twice in the final round for a 69 and a one-shot win over the hugely talented Thomas Pieters.

The new World No 4 led by three going into the delayed final round after three birdies in the final seven holes of his third round. He then continued in the same fashion with back-to-back birdies to get his fourth round going but then, after just three bogeys all week, threw in a double-bogey five at the short 7th after a spot of bother in same waste ground. One hole later he got back the shots with a holed bunker shot.

Ian Poulter looked to be his nearest challenger early on but his game then unravelled and Alejandro Canizares, Pieters, Henrik Stenson and latterly Rory McIlroy, who played the last seven holes in five under, including a closing eagle for the second time this week, then came at Fowler.

But the 27-year-old American held firm and chipped in at the 17th to give himself some breathing space. A par was then good enough at the last as Pieters missed his eagle three by a whisker.

This was a second American victory in the event, the first was Chris DiMarco who claimed the inaugural title in 2006. World No 1 Jordan Spieth admitted that he was ‘off all week’ but still tied for fifth after weekend 68s and he will now head to Singapore.

What Fowler said: "On seven I made a bad swing, so kind of deserved a little bit of a penalty there. I got a bit of a bad break having a boulder underneath the ball there. So nothing I can really do about that.

“At the next I hit a great drive, got it up there just short and hit a perfect bunker shot. My caddie responded with, 'you know, golf is funny that way'. I said, 'well, you flip them, two pars in a row".