Henrik Stenson is back in the winner's circle

Thirteen months on from his Royal Troon masterclass, Henrik Stenson is back to winning ways.

A little more than a year after his famous Open Championship victory at Royal Troon, Henrik Stenson is a winner on tour once again after a blistering final round at the Wyndham Championship.

Starting the day on 16-under, the Iceman had a front nine that included four birdies and two bogeys. At the turn, there was a host of players all within two shots of the lead.

It was Stenson though who looked calm and composed as he rolled in birdie putts on four of his last six holes, including a 25-footer at the 17th to get to 22-under-par.

The Swede had company at the top after a late charge by young Ollie Schneiderjans. The American made three birdies in his opening nine holes but seemed to be stuck on 18-under through the turn with birdies becoming increasingly more difficult. 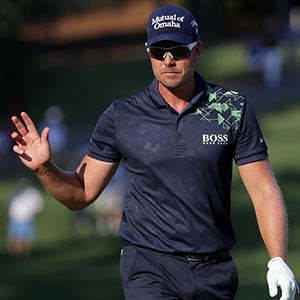 Yet, late birdies at 15, 17 and 18 put the pressure firmly on Stenson and when his approach shot found the back edge of the green, Schneiderjans was growing increasingly hopeful of a play-off, with Stenson left with a difficult two-putt for par.

But it wasn’t to be as the Swede calmly lagged the ball up to the hole to leave the simplest of tap-ins for his sixth PGA Tour victory.

A magnificent final round of 64 helped Rory Sabbatini jump into the top 125, as did JJ Henry. But it will be Martin Flores that will grab the headlines after a hole-in-one at the 16th and a birdie at the last hole helped him to a final round of 63.

It meant the American jumps from 139th to 118th in the standings.

It was heartache though for Shane Lowry, who didn’t manage to break into the top 125 despite an impressive seventh-place finish.