Does anyone love links golf more than Tom Watson? But it didn't start out that way.

“I’ll tell you a story about Carnoustie.” Tom Watson has broken off topic and, high up in a hospitality box overlooking the 18th fairway at Royal Birkdale, he proceeds to deliver a moving love letter to links golf.

It’s a eulogy borne out of passion for the genre – a deep appreciation of the joys, but also the challenges you can only find from striking shots among the dunes.

Watson is utterly synonymous with this form of the game. Of his eight major titles only two – the Masters in 1977 and 1981 – came on courses that weren’t perched right next to either sea or ocean.

His five Open wins, four in Scotland and the last at Birkdale in 1983, mean he’s revered by the British, who like nothing more than to embrace a player that appreciates the strange bounces, the lottery and the sheer beauty of their courses.

So when Watson starts to digress, and talk starts to float away from Jordan Spieth’s chances that weekend in Lancashire, no one is in any mood to cut him short. This is story time.

“Jack told this to me,” he starts. “Big three golf – televised between Arnold Palmer, Jack Nicklaus and Gary Player. They played Carnoustie and he said the wind was blowing 25mph and the golf course was completely burned up.

“There was no green grass on the golf course. He said ‘Tom, guess how many greens in regulation in total the three of us hit in 54 holes – 18 holes each?’

“He said he hit four greens, Gary hit two and Arnie hit one. One green Arnie hit in 18 holes.”

If Watson can tell a yarn then the tales about his introduction to links golf are the stuff of golfing folklore.

Ahead of the 1975 Open at Carnoustie, he pitched up at Monifieth Medal for his first hole on a terrain utterly unfamiliar to him.

So the story goes, he crushed his driver down the first only to lose his ball. It wasn’t exactly love at first sight.

Indeed Watson’s appreciation for links, despite winning the Open that year, would be a gradual conversion.

“I didn’t like links golf,” he recalled. “I didn’t like St Andrews at all when I played it in ‘78 for the first time – blind shots, bouncing everywhere, having to land the ball short at 6 to try and feel the way up the slope there and get it just in the flag position, just over the hill there. I didn’t like that.”

“It’s not about yardage, it’s about feel.

“At the Open, I forget who hit the shot but he was in the rough at 16. It was uphill and he had to hit over a cross bunker. He hit a sand wedge and it was downwind. He landed it short of the green with a sand wedge, 30 yards short and the ball rolled onto the green another 30 feet – uphill with a sand wedge.

“Now, how do you feel that? You normally hit a sand wedge and it stops and backs up. He had to feel that shot to roll it out of the rough, with not a lot of spin. He had to feel how far that ball was going to roll. That’s the element of a great links player.

“How can you feel that type of distance? It is all about distance control. American golf is pretty simple. Your distance is usually pretty spot on and you can usually stop the ball quickly. Over here you can’t and that’s what the secret is – know your distances.”

Prior to the Open, Watson flew into Scotland for a “true links” experience – a gathering of close family and friends at some of the country’s most venerable links: Royal Dornoch, Nairn, Castle Stuart and Brora. 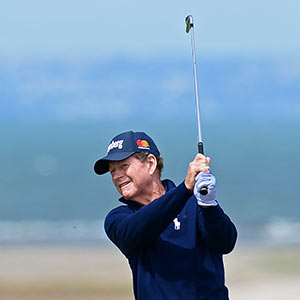 No cameras, no publicity – just a golfer, and his pals, enjoying a knock. It’s hard to think of a more romantic golfing image.

“We flew in from Inverness, went up to the north and just had a marvellous time.

“Brora was a wonderful links golf course. I had a very difficult time with it.

“Playing the incoming nine downwind was really tough for me. I couldn’t keep the ball on the greens. I think I hit one green in regulation coming in and shot 76.

“My caddie Ron is looking at me, ‘Huh? This guy is supposed to be good.’ I’d like to play it again. I’d like to challenge it again. But it was very good.

“The condition of all the courses we played were great but that day, when we played Brora, was my favourite day. We came back and ate dinner, at Dornoch.

“This is about 5.30pm and I organised with the pro there if we could go out and play some foursomes golf with eight of us.

“We teed off about 7pm and I got my trolley, and my bag, and I’m pushing it.

“Everyone else is carrying. We go out there on the first hole. We end up playing the first six and the last six – beautiful day, cloudless, no wind. “It was just delightful to play.”