India’s Anirban Lahiri landed his second European Tour win in the space of three weeks after beating compatriot SSP Chawrasia in a play-off at the Hero Indian Open. 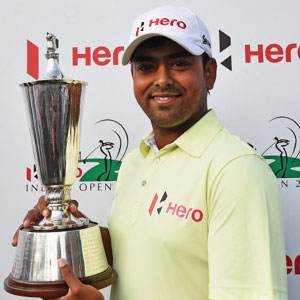 Lahiri who had won the Malaysian Open a fortnight ago began the final round seven shots off the lead but produced a final round 69 to force extra holes.

The playoff took both men back to the par-five 18th for the play-off and with Chawrasia hooking his tee shot into the trees and unable to make par.

Lahiri holed from 10 feet for birdie to seal his second European Tour win.

"It feels like I've skipped a couple of steps to get to where I am right now, but obviously it's a fantastic feeling and I hope I can keep playing well through the year,” the 27-year-old said.

"It's incredible. Starting the final round I didn't think I had a chance.

"It was really tough, one of the toughest days I've ever played at Dehli Golf Club, but I'm really happy to have accomplished this.

“It's been a childhood dream, and now to keep the Indian Open trophy at home is very very special.

"The way SSP has been playing he was hard to catch so for me personally I was just trying to play well, and try and give myself a chance on the back 9.

"It was only when I walked up to the 9th green that I noticed I was only one back. So I knew when I made the turn I was only two back.

"The last time I won here I was four back so I knew it was possible. I think that fact that I have been in a similar situation before really helped me.”

The win moves Lahiri to second on The Race to Dubai and cements his place in the top 50 of the Official World Golf Ranking, with a Masters Tournament invite in April now looking certain.