For 10 years we have been generally bored by this tournament at Doral, then we got this week of fun at Chapultepec with endless chip-ins, Phil Mickelson being Phil Mickelson (in a good way), upset tummies, a host of big names peppering the leaderboard and a one-shot victory from the World No. 1. It all seemed so different and, from start to finish, it was great.

This was Dustin Johnson’s first start since taking over at the top and he now follows Ian Woosnam, David Duval, Vijay Singh and Adam Scott in managing a victory on their maiden test as the world’s best. He also now has four WGCs – only he and Tiger Woods have managed more than three, though Woods is somewhat clear with 18 of them.

Johnson looked to have this tournament sewn up with a three-shot lead at the turn after four birdies going out but then he went backwards as Jon Rahm came at him. A missed four-footer at 12 and a bunkered tee shot at the next meant the lead was down to one and Rahm then holed from off the green at 14.

Then, with a graphic telling us that he had gone 59 holes without a three-putt, the Spaniard did the expected and bogeyed. And then did it again at the next. 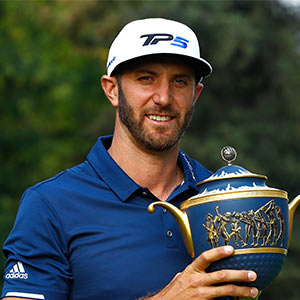 All of which let Tommy Fleetwood slip into second place with a monster putt at the 72nd hole for a brilliant 66 which will guarantee his debut at the Masters next month.

Another Englishman, Ross Fisher, also enjoyed a very profitable week with a hat-trick of birdies to finish, he had nine in total, for a six-under 65.

There did look to be a possibility of a play-off when Johnson found a fairway bunker but, from an awkward stance, the American punched one into the heart of the green.

The expected charges of Mickelson (71), Justin Thomas (72) and Rory McIlroy (71) never happened while Lee Westwood played his first six holes in two under and his last 12 in nine over. All of which added up to a 78.

“It was my best shot of the week,” Johnson said of his wedge shot from the 18th fairway bunker.

“I’ve got a lot of confidence in the game. I feel like I’m controlling my ball very well and I feel like I’m starting to drive a little straighter. If I can drive it straight I’m going to play well every week.

“It means a lot [being world No. 1] – it’s a tough spot to be in and there a lot of pressure on you. I played just well enough I guess, because I won by one.”