Johnson hails WGC-Cadillac victory as best of his career 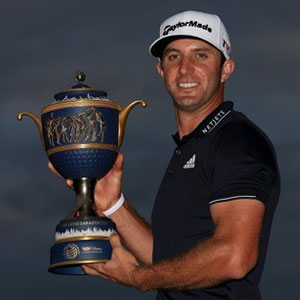 Dustin Johnson secured his first victory since his self-imposed exile from golf at the WGC Cadillac Championship and claims it was the best yet. The American triumphed by one shot over J.B. Holmes at Trump National Doral after Bubba Watson had stormed into an early lead.

Since returning to the game at the Farmers Insurance Open in February, Johnson missed two cuts either side of a T4 finish and a play-off defeat to James Hahn at the Northern Trust Open. This week saw a return to his best, finishing nine-under-par for the tournament.

"I knew I was really good, I just knew there was something missing that could make me great,” the 30-year-old said.

"I’ve really been working hard on that and I think it’s showing right now."

He said: “All of them are good but this one might be the best. I’m so excited right now I can hardly talk.”

Holmes’ five-shot lead at the start of the day was quickly as Watson flew out of the traps. However the two-time Masters champion began dropping shot and the three American’s were locked on -8 heading into the final holes. Johnson made a birdie at the par-3 15th to move one clear and held on for victory.

Delighted to return to the winner's circle, Johnson added: “It means everything. It’s been a tough road but a really good one; obviously a lot of great things have come out of it - my son and me and Pauline are doing great - it just feels awesome to get that W.“