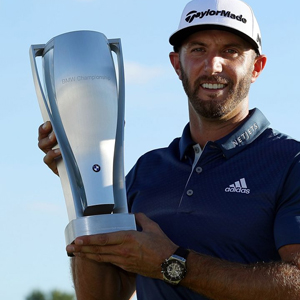 Twenty-four birdies and three eagles is generally going to get the job done. A new putter also helped. Were it not for Paul Casey it would have been a procession – Johnson won by three – after closing with a 67 for his third win since June. The pair traded eagles at the 15th before the US Open sauntered home.

The American only had one par in his first eight holes but fortunately five of those holes were birdies to snuff out Casey’s fast start. Fellow American Robert Castro, who holed out at the 7th, was third while Charl Schwartzel had the round of the day on every level as his eight-under 64 just squeezed him into the Tour Championship.

Rickie Fowler missed out by a single shot and 0.57 FedEx Cup points after finishing 59th of the 69 players. Roberto Castro, Daniel Berger, J.B. Holmes and Schwartzel moved inside the top 30, Fowler, Sergio Garcia, Brooks Koepka and Henrik Stenson moved out.

Last week’s winner Rory McIlroy was tied for 42nd but the other big news was Jason Day’s withdrawal after eight holes with a back problem. The Aussie tweaked his lower back when he bent down to put a tee in the ground at the 9th and decided to pull out rather than risk further damage. The thinking is that he will be fit for the season-ender at East Lake.

What Johnson said: “You can’t worry about the holes you make bogey on, the only thing you can do is make birdie on the next shot. Winning the US Open was definitely a kick start. It kind of gave me a lot of confidence, especially with all the things that’s happened to me in the Majors where I’ve been so close and had a couple mishaps or a couple bad penalties, whatever, whatever happened, I’ve been very close.

“So, winning that, finally getting that first Major, I think that was a big deal and that kind of kickstarted my year.”


Dustin Johnson made it three wins in eight tournaments with a comprehensive victory at the BMW Championship and the penultimate FedEx Cup playoff event.

The US Open Champion started the day three shots ahead of England’s Paul Casey but after a couple of early bogeys the lead was quickly wiped out.

Johnson rallied though and finished with a 5 under 67 and three shots clear of Casey in second place.

The man from South Carolina relied on a full bag of Taylor Made equipment to get the job done for the 12th time on the PGA Tour, including the same M1 driver he used to win his first Major Championship at Oakmont.

The only difference this week to his US Open triumph was the putter. Johnson used a Limited Spider edition putter rather than the Scotty cameron prototype he has used for the rest of the season and looked extremely confident on the greens.

“I’ve got a lot of confidence in every part of my game – especially all the work I’ve put in on my wedges, which has really paid off this year – and this week a new putter that really worked,” said Johnson.