Jordan Smith: From the merchandising tent to Le Golf National? 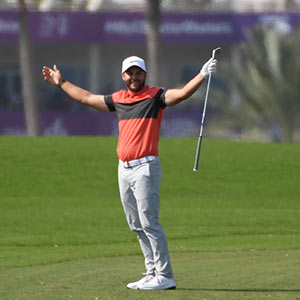 Jordan Smith's rise has been meteoric; from the EuroPro to European Tour winner in two seasons. Now he's an outsider to make the Ryder Cup team.

A year ago the 7.55 tee time of Renato Paratore, Jordan Smith and Dylan Frittelli at the Czech Masters might not have raised too many eyebrows but these days here we have three winners on the European Tour since June and two, Paratore and Smith, who will be kicking off their Ryder Cup qualifying campaign.

Paratore played in two Junior Ryder Cup sides and will be looking to become just the fourth Italian to play in the competition. Smith won the European Open the week after the Open Championship having spent the Thursday at Royal Birkdale on site as the second reserve.

He arrived at 11pm on the Wednesday night, was at the course for 5.30am to warm up and was in the car back home after a day spent drinking a lot of coffee and various range sessions.

The win in Germany got him into the PGA Championship and, keeping up with the trend of taking everything in his stride, he finished 9th at Quail Hollow.

Smith also has roots with the Ryder Cup but his are slightly different; he was at Celtic Manor in 2010 but in a working capacity.

“I was working in a merchandising tent. I was at college at Filton near Bristol doing a two-year golf course and I was on the tills in Wales,” the 24-year-old told NCG. “You would work half the day and then go and watch the golf.”

The fact people are even considering Smith for a Ryder Cup debut seems ridiculous given, two years ago, he was playing on the EuroPro Tour. He ended the year in top spot on that money list, did the same on the Challenge Tour and, instead of enduring that tough rookie season on the really big boys’ tour, he nearly upstaged Graeme Storm and Rory McIlroy down in South Africa two weeks into the new year.

After three straight 68s he came within one shot of joining his Sunday playing partners in a play-off.

“That was insane,” he said at the time. “Like nothing I have experienced in my life and I absolutely loved it. I was very, very nervous at the start of the round so to make those (early) putts was a big help and really settled me into the round.

“It was just such an amazing experience, especially coming up the last hole there. Honestly – it was just insane. I am absolutely delighted with the week overall. I would have loved to have won but I got myself into contention and looking forward this experience will be invaluable for my future. I just can’t wait to play in front of crowds like this again."

The following week in Abu Dhabi he was paired with the Ryder Cup captain Thomas Bjorn.

“I played with Thomas on the first two days (Smith shot 68-70) and he came and said ‘well played’ after I won in Germany. It was good fun playing with him, it was the week after South Africa and I played well and got to know him a bit. He’s a nice, fun guy.”

So does Smith think getting to know Bjorn a little bit better, as his captain in France, is a possibility?

“It is definitely a possibility if I keep playing as I am. That will be the ultimate goal for next year. If you can get in the majors and into the top 50 (Smith is currently 69th in the world) then it becomes a possibility,” he said.

“I didn’t make the matchplay stages of the Super 6s in Australia so the last time I played it must have been the Walker Cup in 2013. I lost both my matches there but I like to think I’m a good match player.”