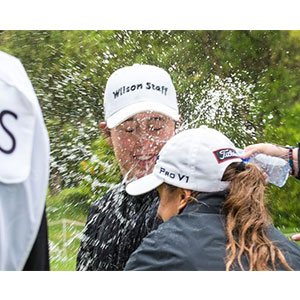 In just her second start the Spaniard battered the field in Morocco with a last-round 65 to win by six shots.

The 20-year-old rookie was two behind at the start of a wet final day but then recorded eight birdies. She was tied for the lead with Florentyna Parker by the 8th and then had to hold off fellow rookie Angel Yin from America.

Yin then bogeyed three on the trot and Iturrios turned it into a procession. She finished it in style with a lengthy birdie at the last where Parker, after 17 straight pars, had her only bogey but still took second.

What Iturrios said: “This is the best day of my life and my best achievement since finishing fourth in Lalla Aicha Tour School. I really enjoyed playing at the same venue my Spanish friends and colleagues on the European Tour. I had a lot of fun.”