Aside from all the heroics of golf's young brigade, 39-year-old Graeme Storm has been one of the players of 2017 having 'lost his card' last year. This time last year Graeme Storm’s career was in limbo. The North East star had just finished €100 behind David Howell to finish 111th on the Race to Dubai. For the first time since 2003 the former French Open winner was heading back to Q School.

But in an 11th-hour reprieve Patrick Reed withdrew from Turkey, and then decided not to play the Nedbank, both of which meant that the American hadn’t played enough tournaments to remain a fully-fledged member of the European Tour.


When did you find out that you were back in?

I didn’t officially find out until I was told that Patrick wasn’t going to Turkey. He wasn’t entered for South Africa – the European Tour wanted him to have an invite so he could fulfil his numbers – but he wasn’t going to do that. So I knew that he would come off the Order of Merit and I would be reinstated.

I had to wait more than two weeks. I was entered for Q School so I spoke to the tour and they said they would fund my trip to Spain which was good of them as nobody knew for sure what was happening.


So you had mentally prepared for the daunting trip back to Q School?

I was there four straight years from 2000 and I wasn’t looking forward to it. The competition is getting tougher and it’s a long week. You’ll play around nine rounds with the practice rounds but I had kept myself practising after Portugal so I would have been ready if need be.


With the second chance did your mind-set change going into tournaments?

Definitely, I thought I needed to enjoy it more. I was getting dragged down with it all and I had a lot of off-course issues financially. They took a bit of a toll on me and you begin to question whether you can afford to stay in this hotel or can you afford this flight so it’s not easy.

Getting the reprieve, I had the mind-set of good enthusiasm, good preparation and from the first tournament back things improved. That was at Leopard Creek and I was very fortunate to stay with the owner Johann Rupert so I was very comfortable and I finished 4th so that was a big relief. Getting that good start helped.


You’ve been on tour for a long time and earned a lot of money so people would be surprised to hear you still have financial concerns?

I got involved with the wrong management group, it’s as simple as that. They didn’t run my books very well. Things started to emerge and when I decided to leave and everything came out I was in a bad position financially.

From 2014 to this year it was very difficult. I was 2nd in Switzerland in 2014 and then 2nd at the European Open the year after and they couldn’t have come at better times as I was struggling and that high finish didn’t happen last year.

I did think I would have to restart like I had in 2003. Back then it was different as I didn’t have the responsibilities. Last year I was thinking of how to pay the mortgage or the next bill and I have a family to think about and you want the best for them.


Tell me about Jeffrey?

I met Jeffrey in 2004 and my caddie then would get him to help with the practice rounds and that has continued every year I would go back to South Africa. Then this year my caddie was getting married in Jamaica the week of the South African Open so I just went down there knowing Jeffrey would be there.

I told him that he would be working for the full week so he was obviously over the moon. So we came to an agreement that I would pay him £600, which is a lot of money down there. There was never any talk of a percentage.

Then the journalists down in South Africa started talking to him saying he should be expecting 10 per cent. I spoke to the South African tour and other players there and asked them what would be the right amount to pay – they said it was seven per cent for a win so Jeffrey just needed to open a bank account as he didn’t have one.

He did that and I paid him but in the meantime he was talking to journalists in South Africa and telling them I was shafting him. It is so unfortunate as it was a really nice story for both of us and we have known each other for years.

This journalist was going to ruin me, this was in April, and it was a real sticking point. 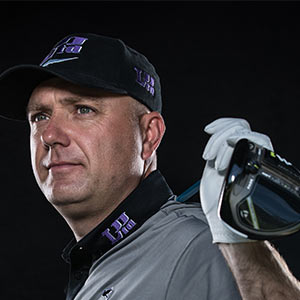 But you had done the right thing?

I actually paid more as I paid seven per cent before tax rather than after but the journalists were teeing him up. We had never talked about a percentage and I was just trying to stay in the zone on the Sunday and I was up against Rory McIlroy.


You’ll be defending your title in January, I take it there’s no chance that he will be back on the bag?

No. I was getting phone calls as he had given my number out and people were calling me up and threatening me so it has all gone sour.

You had never played with Rory McIlroy before the final round at Glendower. Most players would gently go to pieces in that situation, why do you think you didn’t?

I was excited, we have always got on well and I have known Rory since he came out on tour. What made it easier was that we were playing in a three ball with Jordan Smith so it was more relaxed.

The whole week I was just in a zone and it was a zone that I haven’t been back in since. Even though I’ve had some great weeks this year I haven’t even been close to that frame of mind where I am just zoned out, nothing fazed me. It was quite a surreal kind of week.


Were you aware of Rory’s rib problem?

I knew that he was struggling but he was still hitting it miles. I think he was on such strong painkillers that I don’t think he noticed it too much but maybe he didn’t have the fluidity in his swing. I think he was playing at about 95 per cent and he was pretty solid all day.

Players always say play-offs are less pressure given that the worst that could happen would be to finish second. How did you see it?

It was already some great points in the Race to Dubai and, again, the play-off was relaxed. I was desperate to win but you are playing against maybe the best player in the world so I had to just concentrate on my own game. He can do different things to me and get himself in different positions on the course so I did my own thing. To be honest I thought it was never going to end, he made a mistake at the third time of playing the 18th and I was waiting in the wings to finish it off.


You stuck to your game plan with the 5-wood off the 18th tee while Rory hit driver?

I had no other option. The 3-wood brought the bunker into play and I couldn’t carry it, like Rory, with the driver. At the third time of asking I kind of roofed it a bit and that ended up giving me a better yardage to the flag so I had the perfect 5-iron in rather than being in between clubs.


You say you’re your own biggest critic, are you now easier on yourself?

No! [Laughs] With good golf you have higher expectations of yourself. Last week in China I was struggling, there was no cut and you are getting paid well but that’s not the way you want it to be. You do become your own biggest critic.

I am hard on myself, a bit less than before and [myself and psychologist Lee Crombleholme] are working on it. For my swing I have Mike Walker and Pete Cowen and I have gone back in the gym to get some longevity out of my game. I’m working with [Jordan Smith’s trainer] Rob Hobkinson on the fitness side so I have a great time behind me. I’m trying to put everything in place so this year isn’t a one-hit wonder.


And the rest of the year you’ve really consolidated well on that win in South Africa?

I was sixth at Wentworth, third in Portugal and fourth at the British Masters and I was the leading Englishman in all three. I really wanted to win at Close House with it being back in the North East but I couldn’t keep up with Paul Dunne. Other than South Africa that has been the best week of the year.


What do you make of players hosting events?

I think it’s the way forward. Ian [Poulter], Luke [Donald] and Lee [Westwood] have all done great jobs, as has Sergio Garcia at Valderrama.


Where would you have yours?

It would have to be at Rockliffe Hall where I’m attached to. Obviously it all depends on logistics and Sky Sports, I think Justin Rose will be hosting at Walton Heath so that will be great.


What are the key lessons that you’ve learnt over the years?

Learning from all the ups and downs and play each week as it comes rather than dwelling on the previous week or getting ahead of yourself if you’ve had a good one.

And enjoy each week. In 2016 I set goals and targets and that put pressure on me and, when you don’t attain them, it plays on your mind. Winning early on gave me the freedom so I could enjoy it.

My exemption doesn’t go beyond 2018 so I have to keep working hard and that’s why I have got this team around me.

Walking off that green in Portugal and thinking I had lost my card I was so down in the dumps but getting the reprieve with that stroke of luck and then winning is what dreams are made of.