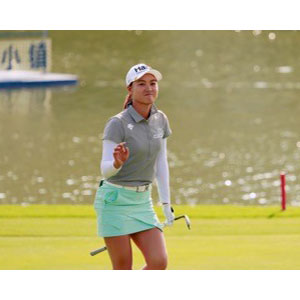 Australian Lee looked to be in control of the tournament with a six-shot lead after two rounds but then stumbled with a 73 on Saturday as Korda managed a Saturday 66.

She led by three after seven holes but things tightened up over the back nine. At the 17th Jutanugarn birdied, Korda parred and Lee three-putted to leave the Aussie and Thai players tied, one clear of Korda.

Jutanugarn tugged her tee shot into the water and made six, Korda made a birdie four but that was matched by Lee who notched her third win on Tour.

Michelle Wie closed with a 74 but it was still good enough for her first top-10 finish of the year.