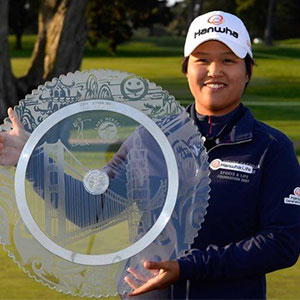 Haru Nomura recorded her second win of the 2016 season on the LPGA Tour. After taking the 36 and 54 hole lead, Nomura began the final round with a 3 shot advantage to her closest competitors Lee-Anne Pace and Na Yeon Choi.

With gusting winds of 40mph it was a very up and down final round for Nomura. She made three consecutive bogeys on the front nine but bounced back with birdies on the 12th, 14th and 17th. Meanwhile her challengers were finding the conditions tough also. Lee-Anne Pace had a horror show at the start of her round, making 5 consecutive birdies to fall out of contention and Na Yeon Choi also bogeyed her first two holes.

With her victory this week, Nomura becomes the third multiple winner of 2016, having captured the ISPS Handa Women’s Australian Open in February for her first win on Tour. She joins Ha Na Jang and Lydia Ko as the only multiple winners this season.