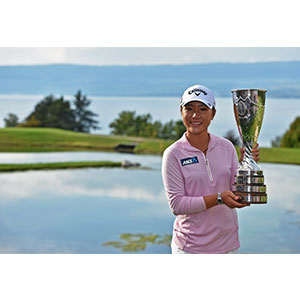 Lydia Ko became the youngest winner and shot the lowest final round in a Major thanks to a closing 63 at the Evian Championship in France.

She started the final day two behind and was further behind after a hat-trick of birdies by the American from the 5th.

She was level by the 11th and four birdies coming home, and a Thompson double at the 14th, finished the contest. Ko then signed off with a birdie at the 18th, a hole she had bogeyed the first three days.

“Just to shoot 8-under on any day is a pretty solid round,” Ko said.

"I had the same under par as the last three days and today. It was kind of like a whole three days’ worth of work today.

"Shooting 8-under is great, but not to make any bogeys, I think that’s a bigger thing because it meant that when I was in trouble I kind of got myself out of it, and when I had the opportunities, I was able to grab it.”