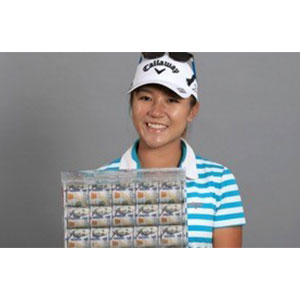 Lydia Ko won the $1m Race to the CME Globe title for the second year in a row after finishing joint seventh in the season-ending CME Group Tour Championship in Naples.

The 18-year-old New Zealander held off Inbee Park and Lexi Thompson to clinch the order of merit with both missing birdie putts on 17 which would have taken either past Ko in the money list.

Ko claimed the season-long points race, the Race to the CME Globe, and a $1.5m bonus, the tour's player of the year award and the tour's money list award - the three major prizes – in a 2015 campaign that also saw he land her first major title.

Ko carded a final-round level-par 72, missing a putt for birdie on the 18th and did not know she had topped the rankings until she had walked off the green.

“I think earlier in the week I said if I could choose one of the awards, I would love to be the Player of the Year, Ko said.

“To know that I am the Player of the Year, it's an awesome feeling. Just having my team there and my coaches, my trainer, my family, it's a very special moment.

“And I'm so happy that my team was here with me because it wasn't only me that was working hard, it was the whole team. Everybody was working so hard to get better and have that more of a consistent season.

“For them to be here with me, just a lot of emotions and it's probably the most I'll cry on TV ever!”

Thompson went round in 68 to finish fourth on 14 under, while world number two Park was sixth, two shots back.