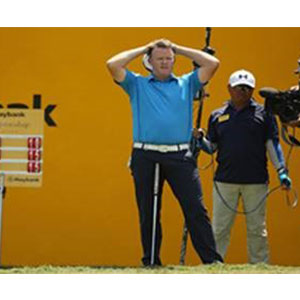 Nearly six years after his last win the Australian eventually won by two over Soomin Lee despite being two behind the South Korean on the 16th tee.

Lee then double-bogeyed the 16th, where Fraser got up and down for par, and the Aussie stayed on level terms with a 10-footer at the next.

At the 72nd hole Lee made another six and Fraser had a near 20-footer to win which he drained. Lee missed a short one to drop into a share of second with Filipino Miguel Tabuena at 13 under.

Fraser signed for a bogey-free 68, he only dropped two shots all week, both on Friday.

What Fraser said: "In the back of my head I felt like I had a chance. He's quite young and it's a big thing to be leading a European Tour event with three or four holes to go.

"So I just tried to keep reminding myself to breathe and to play my own game and see what I could do. The last two putts were pretty unbelievable. I was pretty nervous on 17 and I don't know how I held onto the putter, just trying to stand over that one on the last, I was pretty nervous.

"I got to the Middle East and I think it was the three worst weeks of golf I've played in my career.I had some good practice when I went home, went back to absolute basics and tried to sort things out from the start and everything just fell into place as the week went on.”