Hideki Matsuyama tied the Firestone course record to earn his second WGC win and fifth PGA Tour title overall. When Hideki Matsuyama reached the 13th tee at Firestone on Sunday with a two-shot lead, the rest of the field may as well have gone him.

Not only was the Japanese sensation putting on an astonishing display of ball-striking in the final round of the WGC-Bridgestone Invitational, he had also played the final six holes in eight-under over the first three days.

He went on to card a course record-equalling 61 to finish at 16-under-par.

“I played with Tiger four years ago when he shot 61, so I knew 61 was the number today,” Matsuyama said.

“That might be the best round I have ever played. Firestone is such a difficult golf course and to play as well as I did here, I’m thrilled.”

Asked about becoming the first male Japanese player to win a major championship, he added: “I would like to win one. I will get back to work tomorrow morning and hopefully something good will come.” 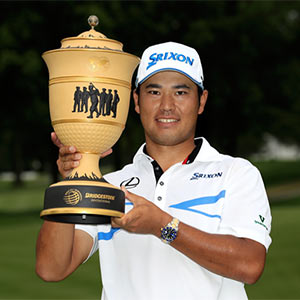 Matsuyama’s victory is his fifth on the PGA Tour, and second WGC having won last year’s HSBC Champions. It also puts him top of both the FedEx Cup and President Cup standings.

To put the nature of the win into context, Zach Johnson was playing in the final group, shot a 2-under 68 and got beaten by five shots.

Thomas Pieters, co-leader with Johnson overnight, carded a 1-over 71 as his challenge collapsed.

Rory McIlroy, playing his first tournament since splitting with caddie JP Fitzgerald, briefly flirted with a run at the title thanks to three birdies in his opening six holes, but a bogey at nine halted his progress, and further dropped shots at 14 and 15 ended his hopes as he finished in a tie for 5th.

McIlroy heads to Quail Hollow – a course at which he has won twice on the PGA Tour – as the bookies’ favourite for the PGA Championship.

“I think it’s been a good week, obviously wanting to play well this week but with one eye on next week,” McIlroy told Sky Sports.

“I think it was a good prep week; I never want to treat this week like that because it’s such a big tournament in itself, but I thought I saw a lot of good stuff to take with me to Quail Hollow.

“I felt like my wedge play got better as the week went on, my iron play got a bit better so those are the two things. If I can sharpen that up and be really good with that part of my game I feel like I have a really good chance.”