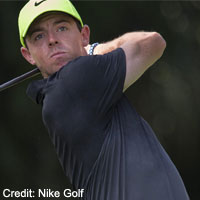 Even as the season winds down World No.1 Rory McIlroy continues to attract silverware. This time the Northern Irishman has won the prestigious Golf Writers Trophy, the second time in three years he has been awarded the prize, following a stunning season that saw him clinch two major championships and play an integral role in Europe’s Ryder Cup domination.

The 25-year-old was the overwhelming choice for the award after votes cast by members of the Association of Golf Writers leaned heavily in his favour. In addition to his victories in the Open Championship and US PGA Championship, McIlroy also won the WGC-Bridgestone Invitational as well as the BMW PGA Championship at Wentworth.

"First of all I'd like to say a huge thank you to the members of the Association of Golf Writers who have felt me worthy to receive this honour, I really do appreciate it,” said Rory.

"To win it for the first time in 2012 felt like a great achievement but to win again in 2014 is testimony to what has been a truly fabulous year for me," the Nike golfer added.

First awarded in 1951 and given to the European who has made the most outstanding contribution to the sport during the year, The Golf Writers Trophy is a highly sought-after accolade.

Having now won the trophy on two occasions, McIlroy joins other greats of the game including Nick Faldo, Padraig Harrington, Tony Jacklin, Sandy Lyle, Bernhard Langer and Annika Sorenstam. Seve Ballesteros and Lee Westwood are the only players to have won the trophy on three occasions.

Germany’s Martin Kaymer finished runner-up for the award after his wins in the US Open and the Players Championship, with Europe’s victorious Ryder Cup team voted into third place.