Mickelson to skip US Open

The US Open is the one major where we get to talk about Phil Mickelson more than Tiger Woods and it looks likely that we won’t be watching either with Mickelson announcing that he will be attending his daughter Amanda’s graduation on the Thursday of Erin Hills.

But it does seem that Rory McIlroy will be in Wisconsin after recovering from his rib injury.

Mickelson, who has six runners-up finishes and needs his home Open to complete the career Grand Slam, is yet to officially withdraw but the chances are that he will be on parental rather than playing duty. He has until just before the commencement of his opening round to pull out.

“My daughter is graduating, she is the school president, she’ll be giving the commencement speech for the school and I am going to be there. Unfortunately it comes on the Thursday of the Open, around 10 in the morning pacific time and there’s no way I can make it no matter what the tee time is. I didn’t want the USGA to be caught off guard and I wanted the alternate to know he will most likely be in,” said Mickelson. 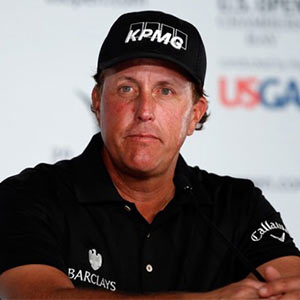 “There is no sense in doing it (withdrawing formally) now. Something might come up with the commencement, the weather, something unforeseen, but it doesn’t look very good. Obviously, it’s a tournament that I want to win the most but this is one of those moments where you look back on life and you just don’t want to miss it. I’ll be able to play the next two years solidly before Sofia (his second daughter) gets to graduate, hopefully.”

Mickelson’s first runners-up finish took place at the 1999 US Open at Pinehurst shortly before Amanda was born. That week he claimed he would leave the tournament at any point to be present for the birth.

But on the upside McIlroy will be there having missed Wentworth and Muirfield Village and having been troubled by the stress fracture all year.

He told The Guardian: “I am ready for Erin Hills and looking forward to playing there for the first time. I never like to miss events but it was important I got back to a level of fitness where I felt like I could give myself the best possible chance at the US Open.

“As I have said many times before, majors will ultimately determine my golf career but I have had the rest of this busy season to consider as well.”