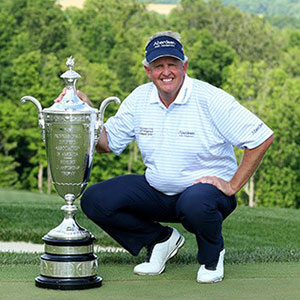 Colin Montgomerie retained his Senior PGA Championship title in style with a five shot win at the 76th iteration of the event in Indiana.

Montgomerie successfully defends his title, becoming the first player since America's Hale Irwin to do so.

A final round 69 was enough to take the title ahead of Mexico's Esteban Toledo.

The 51-year old Scot had held the overnight lead going into the final day but held his nerve to take his third Major title in the senior rank.

"It was a difficult position to be in to start the day, to be honest. Three ahead. Nowhere to go, really, but down," said the former Ryder Cup captain. "I could never relax at all. It was very tiring mentally as well as physically for me.

With this win Montgomerie and Langer have now taken four of the last five senior Major titles.

"I do prefer the four round event. I do. I prefer the setup of Major Championships. It's more to the ilk that I used to play on," said the Scotsman.

"This felt like Harbor Shores did last year, this felt like me playing in a Major Championship of 20 years ago.

"I've got a couple weeks at home and come back for Boston, the Senior PLAYERS Championship, another Major, and then I've got the two U.S. Opens on the West Coast.

"So I'm so looking forward to playing in them.

"This year I've got seven Major Championships to play in. And I enjoy them all."

Former Masters champions Sandy Lyle finished the tournament on two-over par with Ian Woosnam 10 over and Sir Nick Faldo a further four shots back. two-over, 10-over and 14-over respectively.