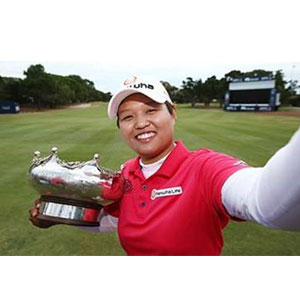 After taking just 26 putts Nomura claimed her first win on the LPGA Tour in Adelaide. Her only previous tournament victory came as a professional in her home country of Japan after turning professional at 17.

The 23-year-old had eight birdies from the 5th to the 17th, including a hat-trick from the 15th, to hold off the more fancied Lydia Ko, who was second, with Karrie Webb a distant third. Charley Hull was tied fourth after a closing 69 with fellow English woman Georgia Hall and Catriona Matthew also in the top 10.

Nomura was round in 65 to finish three ahead of Ko. The World No 1 got within one of Nomura but the putts kept dropping and she sealed the victory with a monster effort at the penultimate hole.

What Nomura said: ““It has a big meaning, a first win on the LPGA Tour. It was surprising that it came early, but it’s just the beginning, I hope.

“What I realised for this week is that I need to believe in my own golf and this week, that’s why I won. If I believed in my golf earlier, then I might have won those previous tournaments as well.”