Penalties for accidental ball movement on green to be waived 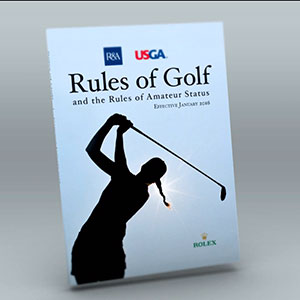 penalty should the golf ball move on the putting green by accident.

Dustin Johnson was the latest player to be penalized over an accidental ball movement, and now the powers that be have decreed the rule should no longer stand in its current form.

The local rule, effective in January, applies only to accidental movement on the putting green of the golf ball and a ball marker.

Johnson was lining up a par putt on the fifth hole of the final round at Oakmont when his golf ball moved slightly while he was backing away. Although he said it wasn’t his fault the ball moved, after the USGA studied video and consulted the rule book, he was eventually handed a one-shot penalty--because it was ruled that his actions caused the ball to move. Even with the penalty, he closed with a 69 and won by three shots.

However, the rule change does not come into effect because of the harsh call against Dustin Johnson.

Thomas Pagel, the USGA's senior rules director, said of the rule change decision: "This has been talked about for quite some time. The Dustin Johnson ruling was the last of many uncomfortable rulings we've had with balls or ball markers that moved on a putting green. We had identified a solution and language as the broader rules modernization. This motivated us to say it's in the best interest of the game as opposed to waiting for the next set of revisions."

The Rules of Golf are revised once every four years, with the next revision due in 2020. Pagel could not say when the entire rules modernization project will be completed, though a rough draft is likely to be released in the spring.

For now, any accidental movement of the golf ball or ball marker on the putting green will require the player to replace it, but without a penalty shot. A local rule is an option for tournaments to use, though the USGA and R&A said it has been welcomed by the major tours worldwide, the PGA of America and Masters.

But what constitutes as an accident?

"Anything that is not intentional," Pagel said.

He added that an intentional act would include intent, such as picking up the ball without marking it. The local rule applies to 18-2 and 18-3 (ball at rest moved) and 20-1 (lifting and marking). The rules haven't changed, but the penalty would be waived.

"We still need to figure out what caused the ball to move," Pagel said. "In those instances, it more likely than not was an accident that caused it to move. We still have to have that discussion. But the discussions are less contentious when there's no longer a penalty part of that conversation."