Perez back with a bang on Tour 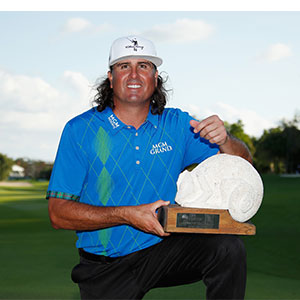 The American claimed his second win on Tour, his first came at the Bob Hope in January 2009, having undergone shoulder surgery in March.

Perez has been in solid form since his return and his 62 on Saturday paved the way for a two-shot win over Gary Woodland, Scotland’s Russell Knox was third.

On Sunday in Mexico he managed a 67, with five birdies in the first eight holes, and his pursuers weren’t able to close the gap.

Woodland started the final round with a one-shot lead over Perez and he needed two closing birdies to take second. It was the fifth time in six occasions that Woodland has failed to convert a 54-hole lead or co-lead.

What Perez said: “The layoff was great. I think I needed it mentally and physically after 18 years of playing professionally. It was just kind of a nice break. I’m so stubborn I needed a forced break.

“I’ve just been on this different attitude the last couple of weeks where I just try to stay aggressive and try to think of the right shot and a good shot and not worry about what happens. It’s really worked. I’ve been working on it the last nine months, since I got hurt. I just had a lot of confidence when I came back. I started about two and a half months ago. I didn’t think it was going to happen this fast, but I thought it was going to be pretty successful when I did come back.”