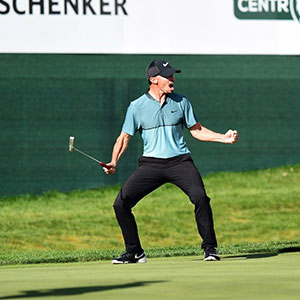 Thomas Pieters, who flew 6,000 miles from Rio to defend his title, needed back-to-back wins to secure his Ryder Cup spot but came up one shot shy as American Peterson matched his birdie at the 72nd hole.

Pieters saw a number of putts slip by and then watched as Peterson rolled in a 20-footer at the last after he had knocked it in to three feet. Peterson, from Arizona, had only taken the lead for the first time with a birdie at the 16th.

Before this week Peterson had shot just one sub-70 round all season, at the weekend he recorded efforts of 64-67.

One player who has booked his place for Hazeltine was Matt Fitzpatrick who needed a fifth-place finish and he got just that after closing with a 69.

What Peterson said: “It’s a dream come true, honestly. To be where I was on the Race to Dubai and knowing that I had a six-week stretch, to sow things up and get my card for next year, it’s an unbelievable feeling.

“I’m going to remember that putt on 18 for the rest of my life. We had the perfect club in on 16 and it was so funny because I didn’t even feel my swing out there. Once it came to the top, all of a sudden I was at the finish of my swing. I looked up and I was flagging everything, it was cool.”

What Pieters said: “It was too many missed putts. I did not make any. I played good and I stayed patient and I just couldn’t get the ball in the hole.

“At 16 and 17 I needed to get up and down to give myself a chance, then coming down 18 I needed to hit a good shot and I did. But fair play to Paul, he made a wonderful putt to win and that’s how it goes.”

What Fitzpatrick said: “It’s very exciting now. We can look forward to it (the Ryder Cup) and get my game in shape. I’ve probably been in the team for the longest period of time. It started two weeks before I won at the British Masters and I jumped into the team and I’ve managed to stay there since then. It’s been absolutely phenomenal and I’m just delighted to be in the team.