Jason Day’s first three-putt of the week came at the first extra hole to hand Billy Horschel his first win since the 2014 Tour Championship.

Horschel’s last four starts had finished in four missed cuts but he was back in the winner’s circle after a closing 69.

At the first extra hole, Day left himself a putt of nearly 50 feet and left himself a four-footer for par. With Horschel tapping in for par, the former world No. 1 inexplicably pulled his effort to hand the title to Horschel. 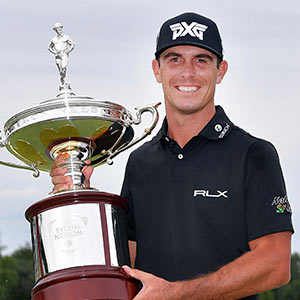 “It’s really surreal,” a clearly emotional Horschel said. “This is probably the most emotional [win]. I’m sort of speechless because the other three wins I’ve had in my career have come off of really good playing. [I came] here [after] missing four straight cuts, not having of any type of momentum. [But] came in here and felt at peace.” The winner’s round livened up when he holed the longest putt of his career, from 60 feet, at the 14th having three-putted the previous two holes.

At the next Day then produced something even more outlandish when his poor drive meant he missed the green at the 15th, only to chip it in. But that lead was wiped out when Horschel made a two-putt birdie four at 16. Then at the last Day, whose first win on Tour came here in 2010, had the better chance but his putt from 15 feet never looked like going on and they would have to return back to the tee for extra holes.

James Hahn came within a whisker of joining the play-off when his wedge from 119 yards lipped out at the 72nd hole. The Korean-born American had led by two but three straight dropped shots saw him overtaken by Day and Horschel and he was unable to make up the deficit.

Masters champion Sergio Garcia came into the final round on the back of rounds of 65-64 but a pair of double bogeys on the front nine saw him turn in 40 shots. His 74 saw him drop 14 spots to a share of 20th.