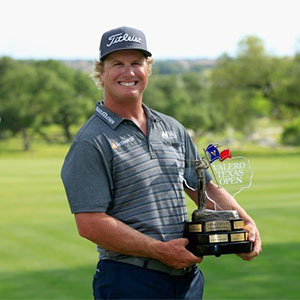 The American made the headlines on Saturday for a duffed tee shot (but still made par) and he them again when he rolled in a 10-footer on the last for a birdie and his fourth win on Tour. That edged him ahead of Patrick Reed, who also made a birdie four, and came after flying the green into a back bunker.

Reed also had chances at 16 and 17 and almost pitched in for a three at the 72nd hole but had to settle for second, a shot ahead of a fast-finishing Chad Collins.

Luke Donald’s recent improved form came hit the buffers with a 74, and a tie for 13th, while last week’s Heritage champion Branden Grace shot a 67 to muscle his way into the top 10. Overnight leader Ricky Barnes faded away with five bogeys in his first 12 holes but two birdies got him back into a four-way share of fourth.

Hoffman, whose last victory came in November 2014, made his move with birdies at 11 and 14 and then saved par after hitting a fat approach to 50 feet at the penultimate hole.