Preview to The Open Championship 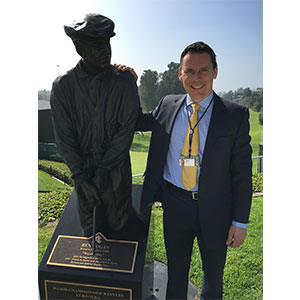 2015 will be known as the year of the links, well nearly, as the Royal and Ancient way of playing has been prevalent this term.

Links courses or at least links style golf courses demand a certain adjustment in play styles compared to everyday fare on the European tour and the PGA tour, and with the run so far at Chambers Bay, Royal County Down even Le Golf National has a linksy feel, Gullane for the Scottish, St Andrews and Whistling Straits, we are being spoilt.

This week's offering at the home of golf at St. Andrews will of course be very special with the world's best players desperate to get their mitts on the claret jug but the question is who can hold it aloft this Sunday.

You have to start your search with links specialists and course specialists and sometimes you can find someone who ticks both boxes and that's why my first of five to watch is Louis Oosthuizen.

The South African possesses one of the best swings in the modern game, one that is not only easy on the eye but also easy on the body and yet he has been plagued by injuries but hopefully when he gets to the old grey toon he will be able to perform like we know he can because his form is good majors wise- top 20 at The Masters and 2nd at Chambers Bay and St. Andrews pedigree all add up to an impressive package.His runaway win back in 2010 can only instill belief that maybe his 2nd open is only a few days away.

My 2nd name on the list is another South African who has already won twice this season on the European tour and nearly apart from 1 swing on the 16th walked away with the U.S. Open in Seattle.

Brandon Grace is a no nonsense golfer that plays with a lot of feel and a certain amount of grip it and rip it and for him the ability to hit the ball low at will can only be an asset in a windy environment. A top 20 finish in Scotland last week has him revving perfectly for a big push on the old course and the next step for Brandon is surely a major championship.

The linksy conditions at Chambers Bay played into his hands and although he didn't win, the almost victory will confirm to him that on his week he can beat the very best.

Number three is Ireland's Shane Lowry,crucially now into the world's top 50 and still on the rise. Shane also played well at the U.S. Open Carding a top 10 and again is a player that is suited to links golf and if we go all the way back to 2009,he won the Irish open at Baltray as an amateur in really tough conditions which he just might find this week in the kingdom of Fife. A player that is plenty long enough off the tee but also possesses a velvet touch around the greens and if the going gets rough then that scoring nous will come into its own when all hell is breaking loose on the course.

My fourth choice and these are in no particular order is the newly crowned Aberdeen Asset Management Scottish open champion Ricky Fowler.

Ricky might be the most natural links player in the world despite being a non European. His grand slam of top 5's in 2014 was no fluke and he gave Rory a good run at Hoylake. I can remember him playing some amazing golf in atrocious weather at Royal St. George's last time it was there when others were having their cards wrecked and his 2 wins this year have been huge-The Players and last week. His links prowess comes from how he sees the right shot to hit. He's a natural shot maker with bags of confidence and that might be enough to get him over the line on Sunday.

My last pick can't be ignored and is carrying 'the only player who can win the grand slam this year's tag in his stride. Jordan Spieth just keeps coming up with the answers, 4 wins this year, 2 of them majors. He is Jack Nicklaus in shorts. When you listen to Jack talk about majors,he breaks it down to it's essential components and Jordan at the age of 21 has a similar mind ie he works out what he has to do and then plays with enough freedom that his natural game is not stifled or over analysed to be successful.

He won the Masters off the back of contending and winning in the run up and broke every record doing it. Then he played 63 practice holes before winning at Chambers Bay and now has won the John Deere Classic the week before the Open when everybody was saying you have to go to St. Andrews early. He will be on a crash course to learn the layout of the Old Course but Jordan is doing it his way and surely is the man to beat and should he win, can you imagine the hype going into the PGA at Whistling Straits. Come on Jordan.