Jon Rahm’s closing 65 was enough to seal a six shot victory at Portstewartand a second win in just over a year as a professional but it wasn’t without controversy.

After discussions between both players and rules official Andy McFee on the 13th fairway the 22-year-old received no penalty as it was agreed Rahm “made reasonable judgement” when replacing the ball.

McFee later revealed that Rahm hadn’t placed his ball in the exact spot but made a clear effort to do so therefore an allowance for margin of error was in play and no penalty was incurred. 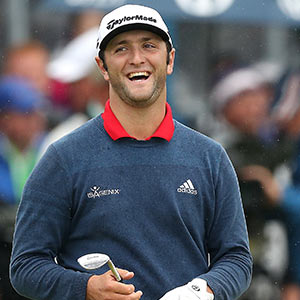 Rahm fired himself to a record-breaking win despite the incident recording the lowest score to par ever at the Irish Open. But, he did admit that the issue left a sour taste.

“It really makes me feel bad that my first win on the European Tour is always going to have that little mark on it,” said the Spaniard.

“I thought I put it back exactly where it was but they came to me and told me it was such a slight difference.

“It’s such a great honour now just to be part of the history of this event.”

Elsewhere, a final round 65 was enough to seal Richie Ramsay’s spot at Royal Birkdale in two weeks as he finished second (-18) alongside Matthew Southgate.

Justin Rose (-17) flew very much under the radar but will be buoyed by a final round 68 to finish T4 at Portstewart with Scotsman David Drysdale (63) and New Zealander Ryan Fox (68) who also sealed the last two Open spots on offer.

American Im failed to replicate his form from earlier in the week as a level par 72 saw him finish fourth and to add insult to injury a bogey on the 72nd hole cost him his spot at Royal Birkdale.