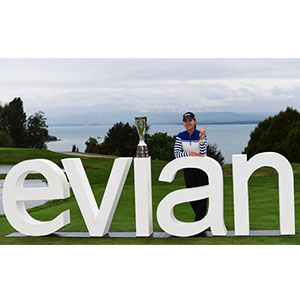 The World No 7 Chun recorded the lowest winning total, male or female, in Major history, eclipsing Henrik Stenson and Jason Day, as she also became just the second player in the LPGA Tour’s history to make her first two victories Majors. Her compatriot Se Ri Pak was the first.

The Korean won last year’s US Women’s Open, she also tied second at this year’s ANA Inspiration, and she won this by four from compatriots So-yeon Ryu and Sung-hyun Park.

The 22-year-old began and ended the final round four shots clear and she was six clear with five to play and she could afford to slightly relax over the closing stretch.

Defending champion Lydia Ko clinched the Rolex Annika Major award, which recognises the player with the best performance in the Majors. Ariya Jutanugarn needed to finish in a share of fifth or better in order to win the award but came up just short at a tie for 9th. Ko finished down in a tie for 43rdwhile Charley Hull was 52nd.

What Chun said: “I know 19-under par is tied record (for the women) before the final round. It was more pressure for me, but I tried to think about it as a really good experience. I tried to more enjoy it. Without nerves, I feel bored. Nothing, bored. I had a lot of pressure on the course, but I much enjoyed my game. I tried my best to keep to my game plan possibly, I think so I might win this time.”