Rhys Davies rolls back the years with win in Turkey 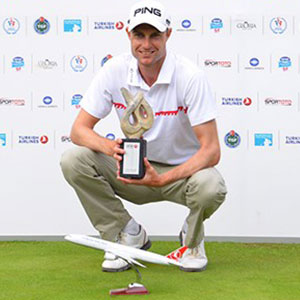 Rhys Davies recorded a much needed win at the Turkish Airlines Challenge, proving that form is temporary but class is permanent with his first title in five years.

“It’s great to win at the start of the season,” he said.

“It takes a little bit of the pressure off in some respects but I’m here to try and win again now.”

A two under par 70 at the pristine Gloria Golf Resort in Belek was enough to secure his first win since beating Louis Oosthuizen at the 2010 Trophée Hassan on The European Tour.

The 29 year old carded a two-under par 70 and a 14-under total, earning him a third career Challenge Tour title.

“It’s a bit of a surprise to be honest”, said Davies, a two-time former Walker Cup player who beat Dustin Johnson and Rickie Fowler in the singles of the 2007 edition.

“I knew it would be tough today, I never doubted that. I was really nervous to start with but again, I expected that.

"I hit a few dodgy shots, but I holed a freakish long putt on the second and even though it was for a bogey, that got me going.

“After that I settled fairly well. I wasn’t playing that well but I was scrambling really well and my golfing brain was in gear – hitting it in all the right places and not putting myself under too much pressure.

“If I’m brutally honest, I probably had a few good breaks this week. I hit a few strange shots at times that I got away with but I hit some fantastic ones too, my wedge and putter were excellent, especially at the weekend.

“The two guys I was playing with didn’t get off to a great start either so in that respect, I didn’t feel a huge amount of pressure.

"I just thought today, if I can shoot three under and get to 15 I’d be tough to catch, so that was my goal. I was one short and I came close to holing my chip on the last so I almost got there.”

The former World Number 44 has endured a worrying drop in form and will be hoping that this is a catalyst for a return to the world's elite.

“Sometimes it’s been really horrible in the last couple of years, I’m not going to pretend,” he said. “It’s been quite dark sometimes.

"But I always felt that if I could get in the mix I could win again, I didn’t doubt that to be honest.

“But I couldn’t see it happening any time soon at various moments. Sometimes it was so bad I didn’t know where the next good round was going to come from.

"That’s all I’ve been looking for, one good score. I know that seems crazy but it was as simple as that.

“It does feel like a long time since I’ve won, but it’s strange that when you get in the mix, everything floods back to you.

"I’ve been very fortunate that a number of people have been very supportive of me, during my tough times.”