Romero back from nowhere

You might remember Andres Romero, he was the Argentine who so nearly won the 2007 Open Championship after 10 birdies on the Sunday. Well he came into the BMW International Open in Germany on an invite and ranked 837 in the world, but he is now a winner again – his first and last victory in Europe came the week after Carnoustie.

Romero closed with a 65 – he had a hole-in-one on Thursday – to beat Richard Bland, Sergio Garcia and Thomas Detry by a shot. Englishman Bland will rue a bogey at 17 while Garcia missed a short one at the previous. Both made brave efforts to eagle the 72nd hole but came up just wide. The Belgian finished with a brilliant 66 but his regret will be just a par at the last. 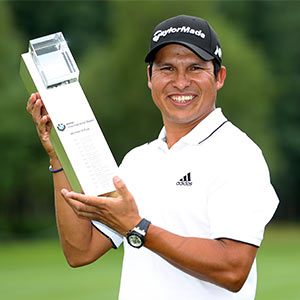 Romero made six birdies in eight holes from the eighth and he added another at the last after leaving his eagle putt 10 feet short.

Romero said: “I haven’t been in that position for a long time, so it felt a little funny, but only on that 18th hole, because I was playing great golf. And then I was looking at the leaderboard and I saw that the other guys missed the green on 17, but I didn’t want to look at that. I was a little nervous.”