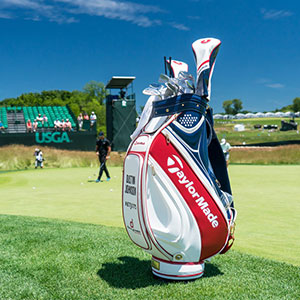 Dustin Johnson won the US Open with a bag full of TaylorMade clubs and a Titleist Scotty Cameron putter.

Dustin Johnson silenced all his critics by producing one of the most remarkable final round performances in US Open history to land a maiden major title.

The winning margin was three shots but that was after a retrospective one-shot penalty on the fifth hole – something Johnson was told ‘might’ be an issue as he reached the 12th tee.

But the American showed remarkable composure under immense pressure and uncertainty and left no doubt with a final round 69 to finish on five under.

He was then docked a shot for allegedly addressing his ball prior to it moving.

In the end it didn’t matter but it overshadowed what was a tremendous performance by Johnson who has come so close in a number of majors.

Unsurprisingly it was Johnson’s length off the tee which was the cornerstone to a fantastic victory.

He used a TaylorMade M1 driver to lead the field with an average driving distance of 316 yards.

This driver has been in the bag since last year’s BMW Championship and is a 10.5˚ head set to 11˚.

Johnson’s TaylorMade M1 fairway is a 16.5˚ HL with both weights toward the toe to help to hit the fade he plays with the majority of his shots.

“I couldn’t be more excited, more happy, and more proud of myself, especially with the things that happened last year at the U.S. Open on the 18th hole, you know, to come back this year and to get it done, it’s definitely bitter sweet. It was a lot of fun.

“Seeing as how it (the penalty) didn’t affect the outcome, no. I still didn’t want the penalty. I didn’t think that I did anything to cause the ball to move, but at the end of the day, it didn’t affect what happened. So it doesn’t bother me at all.

“It’s definitely a big monkey off my back. You know, coming into today, I’ve been in this situation time and time again. So I know it what to expect. I know how to handle myself. For me to finally get it done on Sunday in a major, it’s a huge monkey off my back.”