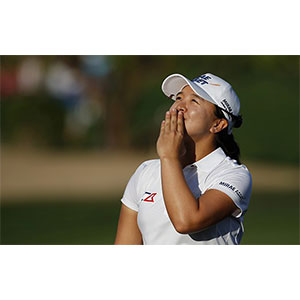 The round of the weekend belonged to the South Korean as she fired a 62 for a five-shot win over Lydia Ko and tied the Tour’s 72-hole tournament record at -27. It had been held by Annika Sorenstam when she shot her 59 15 years ago last week.

Her previous lowest round was a 65, something she had done six times, but the 2015 Rookie of the Year had eight birdies and an eagle. It gave her a fourth win already with Ko’s weekend efforts of 64-65 barely making any ground.

What Kim said: “Yeah. It's a dream come true. Today's score 10-under is my best score ever, ever. So I didn't know that after the last putt, but after I check the scorecard, I asked to Paul, my caddy, did I shoot 10-under? He said, yeah. Oh, my God. That's amazing. Yeah. Dream come true. So feel great now.”