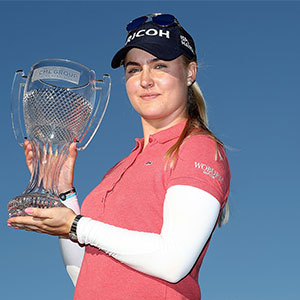 The 20-year-old Charley Hull put together brilliant back-to-back, bogey-free 66s over the weekend to capture the season-ending championship, her first victory on the LPGA Tour, and with it $500,000. Her end-of-year earnings, in her rookie season on the Tour, came to $1,114,295.

Hull led by one overnight and a birdie at the penultimate hole gave her a two-shot lead over Korea’s So Yeon Ryu who bogeyed the same hole. She then found the green at the last and calmly two-putted.

Hull has ‘only’ won once on the LET, in Morocco two years ago, and her best finish on the LPGA was second in the ANA, the first Major of 2016, now she has a win and what a victory to have on the CV.

Women’s British Open champion Ariya Jutanugarn topped the Money List and $1m bonus as well as the Player of the Year Award. Lydia Ko could have turned things on its head with a win but, after a second-round 62, she could only manage 73-72 over the weekend.M

As for the Vare Trophy for the low scoring average it came down to the last putt – In Gee Chun holed for a third straight birdie to beat Ko (72) by 0.013 of a point so the New Zealander came away with nothing for a rare change.

What Hull said: “I was pretty calm. When I’m on the golf course I’m trying not to think about golf and that’s what I just did today. It kind of made me not think I was leading the golf tournament.

“It was a lot of pressure coming from when I played in the Solheim Cup. I was 17 years old and I had five second-place finishes in my first five starts, and took me like over a year to win on the LET. Now this is actually my first full year on the LPGA Tour. Last year I didn’t have full status. To win, it feels good. Feels like I got the chip off my shoulder.”