Sergio Garcia, one of the stellar names in the TaylorMade stable, clinched the 2017 Masters title with the new 2017 M2 driver.

The Spaniard absolutely smashed it off the tee during his final round duel with Justin Rose averaging 305 yards.

That was more than 15 yards longer than the Englishman and left him in sixth place overall. 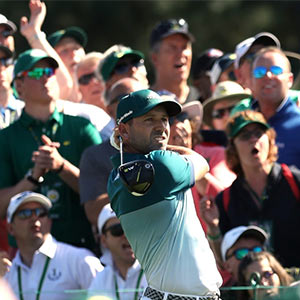 They helped him to hit 75 percent of greens in regulation which put him in tied second with Rose. Only Paul Casey found more over 72 holes.

Never shy of a bit of new gear, Garcia also put the stylish Milled Grind wedges into play almost immediately when they came out earlier this year.

He almost lead the field in sand saves, getting up and down five out of the six times he found the sand.

But perhaps the key equipment change for Garcia was the switch to the TaylorMade Spider Tour Red putter.

It’s the same flat stick used by Jason Day and Dustin Johnson and has helped Garcia find more confidence on the greens.

Putting has long been Garcia’s Achilles’ Heel with missed opportunities to win majors at the 2007 Open and 2008 PGA Championships.

He’s been through dozens of different putters since then but found some form with the Spider over recent months.

It was perhaps summed up perfectly by his par putt on 13, eagle putt on 15 and his winning birdie putt on the first extra hole.

Garcia also uses the new TaylorMade TP5 golf ball which players such as Johnson, Rahm and Rose have been raving about since it’s release early in 2017.