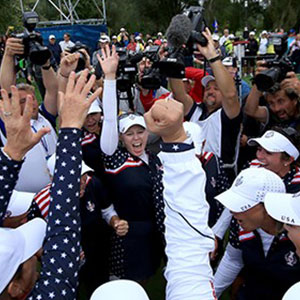 The Solheim Cup is back in American hands after one of the most dramatic final days in the history of the competition.

The resumption of the Saturday fourballs provided the big talking point of the matches, as Suzann Pettersen claimed the hole after rookie Alison Lee thought she had been conceded a two-footer at the 17th.

And it appeared to galvanise the visitors as they then turned it around in spectacular style, winning 8.5 of the 12 singles to sneak home 14.5-13.5. It meant they avoided an unprecedented third straight defeat.

Victories from Karine Icher, Mel Reid and Anna Nordqvist left Koch's team needing just half a point from the remaining five matches, but none of those went beyond the 17th.

It all came down to Angela Stanford, who had lost her last nine matches, and Pettersen and then Sandra Gal and the out-of-form Paula Creamer. Stanford won at the 17th and Creamer completed a 4&3 victory.

"I didn't have to say anything to them after this morning, they were all fired up and ready to go out and play," USA captain Juli Inkster said.

"Last night I put my line-up together and it fell in perfectly the way I wanted it and the girls just played awesome today. They never gave up. Everybody did their job and I couldn't be prouder of those girls."

Matthew lost to Pressel 2 up

Masson lost to Piller one hole