Solheim Cup: Pettersen has no regrets over claiming hole 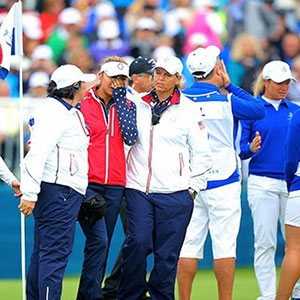 Suzann Pettersen thrives on being public enemy No 1 of the Americans and she was the player most feared heading into the 2015 Solheim Cup.

If this was how they felt previously then we can crank that up ten fold after events in Germany, probably more.

In the delayed fourball match with Alison Lee and Brittany Lincicome the Norwegian, playing with Charley Hull, claimed the 17th hole after the teenager Lee had thought her two-footer had been conceded and picked up her marker.

It put Europe, who had just won the 16th, one up and Hull’s birdie putt was conceded at the last to put Europe 10-6 ahead.

In the end it didn’t affect the scoreline mathematically though it did the job of Juli Inkster’s pre-singles team talk – and probably for any future American captain’s motivational words.

Lee, who won her singles against Gwladys Nocera at the same hole later in the day, explained: “I had just under two feet, like a foot and a half left coming back. And I looked at it and I thought I heard it was good.

“To me it looked good. I mean, it was a really short putt, easy putt. And at the same time Charley was walking off the green and Suzann was already off the green so there was no doubt in my mind that that putt was good. I didn't even think twice about it. So I just picked it up.”

Lincicome added that it was out of character with how the match had been played.

“The putt was a foot. They had given us putts farther than that all day. And Alison just thought she heard it was good.”

Of course if this had happened at the 3rd none of this would ever have happened. The fact that it was Pettersen makes it all the more juicy.

Two years ago one of her sarcastic Tweets was thought to be the reason any American celebration involved the waving of their painted fingernails in each other’s faces.

Hull, who like Lee was reduced to tears at the conclusion of the match, later insisted she was merely walking to confer with Pettersen over whether to give the putt, the referee Dan Maselli then had to intervene and award Europe the hole.

He said there was nothing he could do to allow Lee to “put that ball back down and putt. It would have to be something that was uttered by the team, a caddy, one of the helpers, one of the assistant captains, or the captain, other than that. But nothing was said by anybody.”

The European captain Carin Koch asked if there was anything she could do. There was the option to halve the match but, given Pettersen’s insistence that she wouldn’t have given the putt, she chose to play the 18th out.

Her opposite number Juli Inkster was, not surprisingly, quite as diplomatic after the incident.

“It's just bullshit as far as I'm concerned. Everything was going great. I thought it was a great week for women's golf and to put a damper on that.

“I couldn't believe it. I thought it was good, too. I saw Charley walk off. I saw Suzann turn her back. And then Suzann said she didn't give it to her. If that's the way they need to play to win, we'll just try to do our best out there today. They didn't even have to do it, they were winning anyway, it was tied. They should have birdied 18. I don't get it.

“It's a done deal now. And you know what, we don't want it now. If they wanted to do it, they should have done it then.”

Roll the clock forward to the incredible turnaround and the American had mellowed.

As for Pettersen she would do it all again.

“It is unfortunate what happened,” she said. “I don’t want that to overshadow this event. I was clear. We wanted to see the putt. We were trying to win, and at that stage of the match with the putt she left, I’d like to see it hit.”